How the St. John Real Estate Market Compares to Other USVI Islands 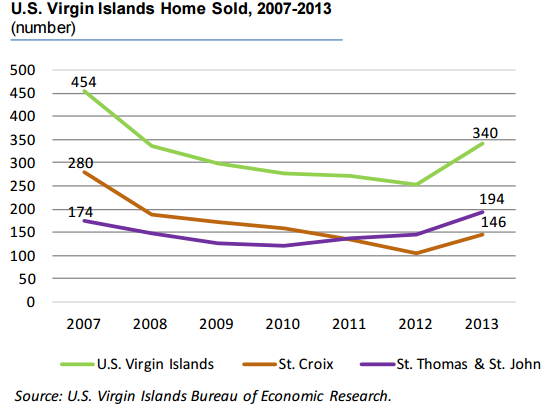 St. John is one of the smallest islands in the US Virgin Islands with a population of about 4,500 residents. When compared with the larger islands of St. Thomas and St. Croix, which both have populations that exceed 50, 000 people, St. John is a much more peaceful area. The fact that most of the island is designated as a protected National Park creates a gorgeous, more private place to live. In the real estate market, these details can offer some stunning comparisons when compared with the larger two islands.

The average price for a home in St. John is $961,442. St. Croix homes sell for an average of $426,719, and St. Thomas homes cost an average of $689,658. When displayed like this, St. John’s average home is more expensive than the other areas; but when factoring the range of prices for each city, things look a bit different. So, though the average of St. John homes is the highest cost of the three, their highest home cost is well below half the cost of the priciest home in the other 2 cities. The price of condos shows a similar pattern.

So, once again, St. John has the highest average price, but the highest price for a condo in the city is well below that of the other two cities.

For those looking to start fresh with a home, they build themselves, the price of land in St. John may come as a bit of a shock.

When compared, St. John seems shockingly high, but it must be said that the island is only 26 square miles in size, and much of that is protected land. And because there is so little space to build available, the high demand for lots can create a much higher rate than other areas.

The figures above show that despite the higher averages in the cost of homes, condos and land in St. John, the rates are still reasonable when compared to the cost of the priciest places in the other two cities. But it must be kept in mind that St. John is the smallest, the least populated, and surrounded by a National Park, beautiful bays and white sand beaches. The price paid for living there is not just for the building lived in, and the yard that comes with it. Homeowners in St. John pay for the beauty, the peacefulness, and the privacy, which are all well worth the price.

The real estate market in St. John seems to be holding its own in 2018 despite some serious...